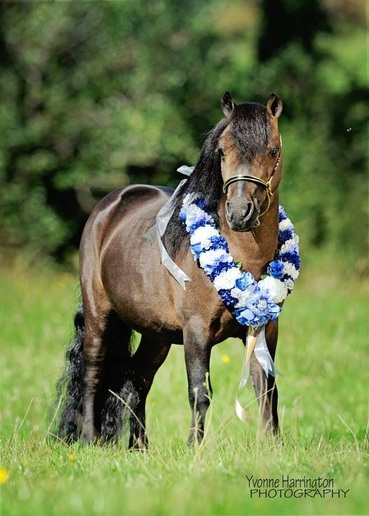 Dodger was our first "real" miniature horse. We bought his parents as pets and decided to let them have a foal. We knew as soon as we met him that there was something different about him, he was going to be special. Showing was never something we had considered before but in the summer of 2011 Dodger was 2 years old and gorgeous so we decided we just HAD to bring him to a show!! Little did we know that after that one show with him we would be hooked and he would go on to take 1st place at every show he would attend and either champion or reserve!! It really was a dream first season and there was no looking back for us. He continued to excel as a 3yr old consistently  placing either 1st or 2nd against mature stallions.
In 2013 we brought him to the Miniature Horse of The Year Show in the UK where he done very well getting a 5th and 6th in 4+ draft type and scaled down show cob respectively both with 15+ in the classes and Reserve Champion solid colour.
He is now excelling in the breeding field for us with 4 gorgeous foals on the ground, one colt in 2012 and 3 fillies in 2013. His 2012 foal Ballykeppogue All That Jazz had an amazing first season as a yearling seldom placing lower than 1st and ended 2013 as the MHCI All Ireland Youngstock Reserve Champion and MHCI All Ireland Overall 1st Reserve Supreme Champion!! We are hoping his 2013 foals can follow in Jasper's footsteps!!


Dodger was gelded in spring '17, he can now enjoy life in the herd and will spend out his days on the farm