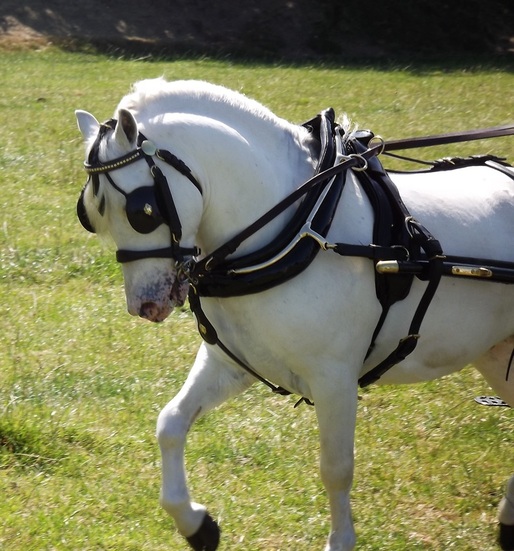 Simply Snowy. Say this name to anyone on the Irish driving scene and they know who you're talking about! This boy is amazing, his stamina, his movement, his presence, the list is endless. He is one of the TOP driving horses, big or small, in the country!!

Unfortunately, Snowy didn't have the best life before he came to us, he was very badly neglected and we rescued him from a field where he was being starved. Definitely the best thing we have ever done!
Despite this, he is the sweetest horse you will ever meet he just loves to be loved!

His show record is amazing, in 2013 he was 1st in every driving competition he entered, always against big horses and ended his very successful season earning the title "International Supreme Champion Miniature/Small Standard Driving Horse Of The Year" at the prestigious Miniature Horse Of The Year Show in Grantham, UK.
In 2012 he also helped dad fulfill a life long ambition of competing in the driving class at the Royal Dublin Horse Show. Dad was the 3rd generation of his family to compete in the class, his Father, Uncle and Grandfather had also competed in the class in years gone by.


We really owe this boy so much he just keeps giving and giving. We are so proud to own him, don't know what we would do without him!!!