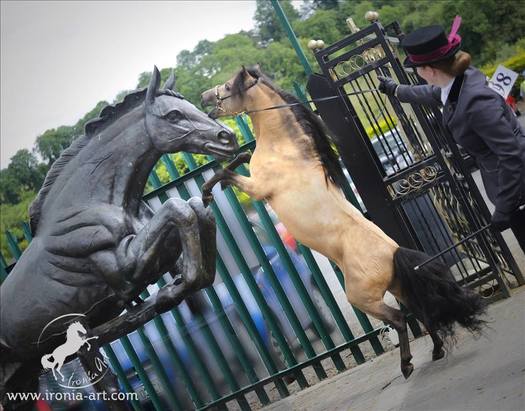 "Rocky" is our resident herd sire, he was bred by Lucky Four Farms in the USA but was imported in-utero by Lucky Legends stud in the UK.
For a small horse he has a BIG personality and attitude to burn!! Just two of the many things we love so much about him

"Rocky" has proved himself to be a fabulous producer siring 4 stunning colts in 2014 for us, his first foal crop, they have all inherited that signature Buckeroo "look". His son, Ballykeppogue Couragio's Gold Record attended 2 shows as a foal winning "Champion Colt Foal" both times so Rocky is already a Champion producer.

In 2016 his foals have continued their winning ways both in Ireland and the UK with 2 of his 2014 colts, Ballykeppogue Couragio's Mastercard and Ballykeppogue Couragio's Billboard Debut taking numerous titles at 2 of the largest shows in the UK - MHCGB National Championshis and MHOYS!!
His only 2016 foal -  an AMHA filly to an outside mare has been unbeaten as a weanling and took a Grand Champion at the Irish National Championships!